A Book Review! The Suspicions of Mr Whicher 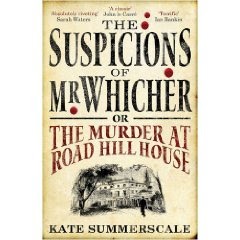 I thought it was about time that for a blog about books and reading, I actually wrote about a book I've read! It seems to be ages since I last did a review.

The Suspicions of Mr Whicher or The Murder at Road Hill House by Kate Summerscale is a true-crime mystery set in 1860 England. A terrible murder, set in a house that was locked from within, so the only ones who could have done it are among the family members and servants sleeping within. What set this murder apart from the many appalling others, were two things: one, that it was in a locked house, and two, London had just formed the Metropolitan Police Force in 1829, and it had started, very quietly, forming the first detective division, which in June 1842 was officially allowed to exist by the Home Office. Jack Whicher is one of those first detectives, a police officer invited to become a plains-clothes detective, in 1842. He is a successful detective, and when the Road Hill murder can't be solved after two weeks, he is invited - because it is outside the Metropolitan City, the county officials have to ask the Met to lend one of its detectives to help solve the crime.

There was enormous publicity about the crime, partly due to the victim - a child - but also because of where and how it takes place - inside the safest place a family should be, inside the home. All of England watches as Mr Whicher investigates.

The incredible irony is that he solves it, but no one believes him, and because he has no proof - the only evidence has been disappeared, everyone is claiming innocence among the family members and servants, and no one is found with any evidence upon them - the murder is not solved immediately. When it is, it is unexpectedly.

This book was a fascinating read. I read it in 3 days. I could hardly bear to put it down, and even though I was on holiday, I read every chance I got. The first part especially is haunting. Kate Summerscale, the author, not only relates the history of the police force (which isn't much since it had just begun to exist!), she relates the idea of policing and investigating with the English society at that time. She quotes from existing newpapers, journals, letters, of that time. I felt like I was seeing the evolution of the detective force before my eyes. "Jack Whicher was one of the original eight Scotland Yard officers. In the eighteen years since the detective force had been formed, these men had become figures of mystery and glamour, the surreptitious, all-seeing little gods of London." prologue

She also relates the idea of a detective to the literature of the time - specifically, of course, to the first mysteries being written by Charles Dickens and Wilkie Collins, and Edgar Allan Poe. Dickens was fascinated by detectives, and Wilkie Collins wrote what many consider to be the best (and very first) of the locked-room mysteries, The Woman in White, which Summerscale says is based in part on the atmosphere surrounding the Road Hill mystery. Henry Wills, Dicken's editor at his paper, saw Whicher in action and described him as "A plain, honest-looking fellow, with nothing formidable in his appearance, or dreadful in his countenance....
"Whicher was a 'man of mystery', in Will's phrase, the prototype of the enigmatic, reserved investigator. He appeared from nowhere....Many of the traits that Wills saw in Whicher became the stuff of the fictional detective hero: he was ordinary-looking,keen-sighted, sharp-witted, quiet." Prologue

I don't normally read true-crime books, partly because the photos leave a bad feeling in my mouth, and the crimes are always horrible. I did read Helter Skelter, that terrible and chilling account of the Manson murders in the 1960's, and a few others that occurred in the 1970's, but they were often left unsolved - the accused never confesses, or the evidence isn't enough to convict. In fiction, the perpetrator usually confesses eventually. Life isn't that neat, and so The Suspicions of Mr Whicher is less thrilling in the second part, which deals with the aftermath of the investigation and what happened to everyone. I still found I couldn't put the book down. I had to know what happened, and how the world - English society - felt about what happened. I came away satisfied. This is a very good book.

I really enjoyed how she tied the development of the English mystery novel to the study of this real-life crime mystery. I learned a lot about crime in 1860's England, and how even then, it took a special kind of personality to be a good detective. This book is must-reading for anyone who reads mysteries.

I'm not the only one who thinks so - I'd seen this book reviewed since last summer in magazine and book review columns (no where in the blogging world though that I can recall), so I thought that while I was in England, I would look for it. It was sold out in York, in Grays Essex, and in London until New Year's Eve, when the publisher finally produced some more copies. It was one of 'the' books being bought in England for Christmas.
Posted by Susan at 19:08

And now I have to read The Woman in White by Wilkie Collins.

Where did I read about a new novel about the life of Charles Dickens narrated by Wilkie Collins? And it was by an author you like! I'll come back when I remember who :P

The book sounds dreamy (for someone who can't get enough of Victorian-era research.) Love your review, as well as your tale of how hard it was to snag a copy. Makes having the book and finally reading it that much more delectable.

I had a glance at all your pictures you posted from your trip. Wow.

This book should be on its way to me from Powells, so I'm glad to read another positive review of it. I'm very much look forward to reading it!

I got this one for Christmas and am looking forward to reading it. I've just finished reading a book called Victorian Sensation which talks about the fascination with murders like this one amongst many other things. Glad you enjoyed this, Susan!

raidergirl3: I did read it, twice now: once as a teenager, and then again in my twenties for a university class. Do you think I can remember anything about it? Nope. So I'm going to have reread it again! lol It is very good, it's just that after years, alot fades.

nymeth: see above too. And please remember this book you have on the tip of your tongue! IT sounds really interesting! And uh-oh, go see my new post (Jan 17). I made a big error......

Julia: thanks! thank you very much. and I'm glad you enjoyed the review. Please see my new post, because I made a big mistake...

Becky: Good! Can you let me know when you've read it and post, so I can add the link to your post? I hope it's a thrilling read for you too :-)

Bride: See, everyone was getting it! I must have stopped into 7 or 8 bookstores looking for it! As Becky above says, once i got it, I was so curious that I opened the first page, and that was it. I read it on the train home that night! I hope you enjoy it too.

Becky: do you have a blog? I can only find you on the Outmoded authors challenge blog....

This sounds absolutely wonderful! Into the TBR tome it goes.